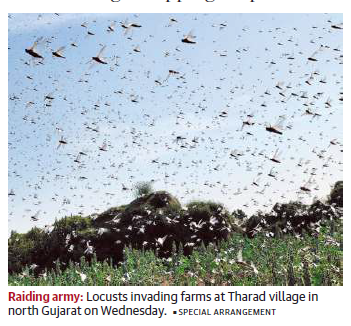 Crops in Gujarat are under attack from grasshoppers known as locusts that have flown in across the international border Pakistan.

Locusts are a collection of certain species of short-horned grasshoppers in the family Acrididae that have a swarming phase(Swarming refers to a collective behaviour in which locusts aggregate together just like flocks of birds).

Under suitable conditions, they start to breed abundantly, and become nomadic (loosely described as migratory) when their populations become dense enough.

Swarms of these pests move around and rapidly strip fields and cause damage to crops.

The adults are powerful fliers; they can travel great distances, consuming most of the green vegetation wherever the swarm settles.

The UN Food and Agriculture Organisation (FAO) had earlier warned of a massive locust attack in South Asia, covering Pakistan and India.

Also, the Locust Warning Organization (LWO) in Jodhpur had noticed the swarms and predicted their trajectory across the international border.

However, preventive measures were not taken by the authorities in Gujarat and they have been caught napping.

According to the Agriculture Ministry Locust Warning Organisation (LWO), locusts are flying in from Pakistana's Sindh province and spreading in villages in Rajasthan and Gujarat where south-western monsoon was prolonged in 2019.

Originally, the locusts emerged in February 2019 from Sudan and Eritrea on Africa Red Sea Coast and travelled through Saudi Arabia and Iran to enter Pakistan, where they invaded the Sindh province and from there they moved into Rajasthan and Gujarat.

As the swarms mature, they have ravaged farms in north Gujarat, devastating farms in the three border districts Banaskantha, Patan and Kutch.

The locusts, known as tiddis locally, have wreaked havoc on standing crops including castor, cumin, jatropha and cotton, and fodder grass in around 20 talukas. Gujarat has not witnessed such an invasion of locusts since 1993-94.

The insects fly in during the day and settle on the farms at night, making it difficult to ward them off.
The farmers under siege are hiring workers and using age-old techniques like beating drums and vessels to scare the locusts away without much success.

The State administration, along with the central teams, has launched a huge pesticide spraying operation to kill the insects.

The government has now assured farmers that the administration will carry out a survey to assess the damages and will accordingly compensate farmers.

India has a Locust Control and Research scheme that is being implemented through the Locust Warning Organisation (LWO), established in 1939.

It was amalgamated in 1946 with the Directorate of Plant Protection Quarantine and Storage (PPQS) of the Ministry of Agriculture.

The LWO’s responsibility is monitoring and control of the locust situation in Scheduled Desert Areas mainly in Rajasthan and Gujarat, and partly in Punjab and Haryana.

The LWO publishes a fortnightly bulletin on the locust situation.

The latest bulletin on the PPQS website, for the second fortnight of June, said control operations had covered 5,551 hectares by June 30.