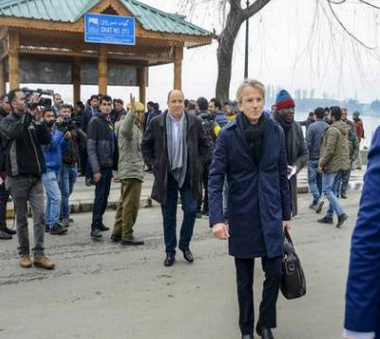 A team of 25 European diplomats visited Kashmir and Jammu on Feb.

The European Union has called for swift removal of communication and political restrictions in Kashmir. The organisation was in touch with the Indian authorities for continuing dialogue regarding the situation in Kashmir, a spokesperson for the EU said. The statement was issued a day after a delegation of 25 diplomats that included the EU Ambassador to India Ugo Astuto and several other European envoys visited Kashmir and Jammu from February 12 to 13. The delegation was not part of the earlier team of diplomats that visited Kashmir in January as they had insisted on meeting jailed political leaders.

However, two former Chief Ministers of the erstwhile State - Omar Abdullah and Mehbooba Mufti -- were booked under the stringent Public Safety Act days before the latest diplomatic delegation visited Kashmir. In recent months, India's relation with the EU has been marked by growing concern of the powerful regional body over the Kashmir situation, the controversial new Indian citizenship law andNational Register of Citizens.