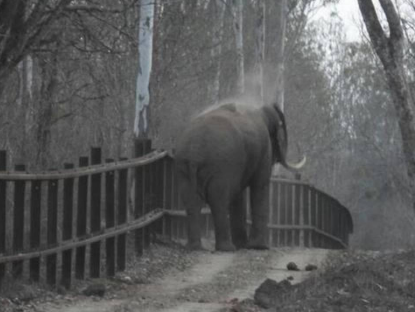 An elephant is chasing motorists along a road. The team of forest staff on the frontlines of the human-elephant conflict, known as the Anti-Depredation Squads , clamber into their SUV and rush to Athima Nagar, cutting through a tea estate. By the time we get there 15 minutes later, with fire crackers and other noise-makers, the elephant has gotten off the road and into one of the vast tea estates.

There are upwards of 250 elephants in the area at any given point of time, given the migration patterns. These two animals are known to raid crops and enter human habitations. Gudalur’s residents, mostly farmers, have an antagonistic relationship with the wildlife and the Forest Department. Forest staff say the people living here view the elephants as pests, and hold the Forest Department responsible for their actions.

They recall how the local people wanted a forest guard transferred after an elephant killed an inebriated man. “The man was still alive, barely, but locals blocked the road with his body lying there, and demanded the transfer of a local forest staff,” said an official. “The locals say the elephants are ‘our elephants’ and that because we protect them, we have to take responsibility for any damage they cause,” he added.

Danger in the dark:

Though run-ins between elephants and humans are common, fatalities, when they occur, are often caused by human callousness. “Rather than chasing elephants, our job is to continuously monitor their movements ,” says Mr. “Elephants have to feed too, and their habitats are so fragmented in the Gudalur region that it makes no sense to chase them every time they enter a tea plantation. “Even if we chase them, we would succeed in getting them from one estate to another or to a different forest range, and they would have to chase them again into ours,” says another forest staffer in Pandalur. Less than a year ago, a forest staffer was killed by an elephant in Kannampalli in Cherambadi while he was trying to chase it away from a human settlement.

The Gudalur Forest Division, despite being on the frontlines of the conflict, faces a massive shortage of manpower. However, the staff's dedication and meticulous planning by the DFO have ensured that the staff are always on call, and almost all elephants are accounted for in their division around the clock. During the day, forest staff monitor the animals, taking pictures, recording the size of the herd and logging their GPS co-ordinates, so that their patterns of movement are always watched, says Mr. With hundreds of such habitations in the belt, the Forest Department has set up camps strategically, with staff stationed at night, ready for action if the animals enter the habitations nearby.