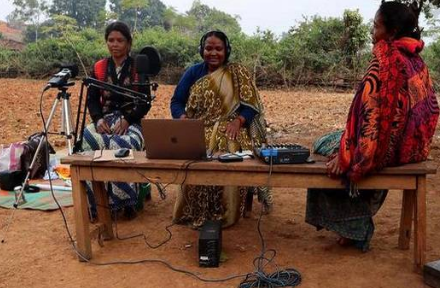 Tucked away in the hills of Jharkhand’s Latehar district, Asur, a particularly vulnerable tribal group, may not have access to good road or means of transportation to the outside world, but that has not deterred them from saving their language. Using mobile radio, the Asur community has been spreading the popularity of the language within their geographical limits. As the voice Dahan-Dahan Turrarr . Dang T inatang Turrarr.

Noa Hake Asur Akhada Radio Enegabu Degeabu Siringabu Urrarr is played out through loud speakers, the bustle at the weekly market at Kotia seizes briefly, as people turn their attention to the sound system that transmits songs and news transmitted in their native language. “The Asur language figures in the list of UNESCO Interactive Atlas of the World’s Languages in Danger. We are trying our best to save our language from vanishing,” said Sushma Asur, who has been at the forefront of community efforts to preserve the language. Radio programmes are based on incidents happening in different parts of world and also news relating to the community.

“In the community, 50% of population could barely speak in Asur language ... They are not fluent in the language. Only 7,000 to 8,000 Asur tribals are left in the community who are well conversant in the language,” said Vandana Tete, a Ranchi-based poet and tribal right activist. With help from tribal rights activists, Asur Tribal Wisdom Centre, an organisation involving Asur tribals, was established at Jobhipat village near Netarhat to protect the language and culture of Asur tribals. About 50 Asur families live in Jobhipat village.

The new generation does not speak Asur language, while middle-aged group speak in a broken tongue. Only four to five elderly men and women can speak the language fluently. The Jharkhandi Bhasha Sahitya Sanskriti Akhra, a forum of tribal researchers and activists, which is a unit of Pyara Kerketta Foundation has been working on preserving tribal culture and traditions since 2003. The forum is supporting the community effort.

Asur is among the nine PVTGs found in Jharkhand. Of the 32 different tribes recorded in the State, only four to five tribes, including Santhali, Ho and Kuruk, have recorded language scripts. Now, villagers are requesting us to organise events at their places and they are also interested in preparing radio programmes,” said Ms. Youth from the community are also being encouraged to write poems in their language and older ones narrate their experience in their own language.