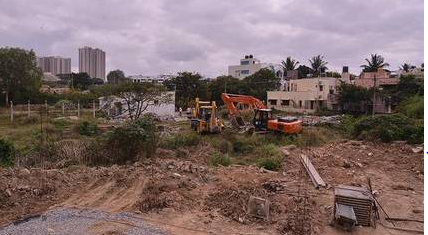 An urban heat island is where the temperature in a densely populated city is as much as 2 degrees higher than suburban or rural areas. This happens because of the materials used for pavements, roads and roofs, such as concrete, asphalt and bricks, which are opaque, do not transmit light, but have higher heat capacity and thermal conductivity than rural areas, which have more open space, trees and grass. The lack of such evapotranspiration in the city leads to the city experiencing higher temperature than its surroundings. UHI s also decrease air quality in the cities, thanks to pollution generated by industrial and automobile exhaust, higher extent of particulate matter and greater amounts of dust than in rural areas.

Due to this higher temperature in urban areas, the UHI increases the colonisation of species that like warm temperatures, such as lizards and geckos. The rapid expansion of buildings, industrial parks and associated high-rise apartments in suburbs, such as Electronic City and Whitefield, has made the city insalubrious . Some of its praiseworthy lakes are dirty and diseased. Likewise, when my family and I moved to Hyderabad in 1977, we were told that we do not need air conditioning or even ceiling fans at night.

Now, we have UHIs, again due to reckless expansion of industrial parks, factories and associated buildings in what was once a vast suburb, which has now become the third city called Cyberabad. These have not only led to formation of UHI but also the associated pollution due to a drastic reduction in the Air Quality Index , thanks to the exhausts from industries and automobiles.

Control of UHIs and mitigation: