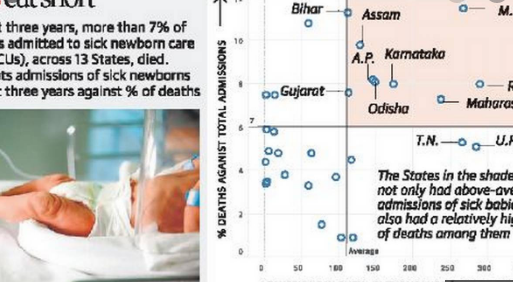 5% against the total admissions to government-run sick newborn care units in the past three years across the country, a rate ominously spiralling since 2017, according to the National Health Mission . The country’s average is 7%. Meanwhile, West Bengal, where 34,344 neonatal deaths occurred in the period, the most in the country, the declining percentage of deaths from 9. 9% in 2019 coincided with a slump in admissions.

Staff crunch, low community referrals, absence of a special neonatal transport service to health centres, reliance on units in cities as last resort and the non-availability of enough units to cater to increasing institutional deliveries had contributed to the spike in the percentage of deaths, said Dr. Saloni Sidana, Additional Mission Director, NHM State unit. “We have just half of the required staff nurse strength at the units across the State. For instance, in the Jabalpur unit, there are only 14 against a required 22 nurses,” she said.

As the units are located at hospitals with the delivery load of more than 3,000 infants per year, mostly in District Headquarters, transporting neonates on time is crucial as they may succumb to fatal diseases within hours. “Although there is a dedicated service to transport pregnant women to hospitals from remote areas, there is none for neonates, who are mostly dependent on the 108 ambulance service,” said Dr. She added, “The health of children and mothers is not tracked in a systematic way by one platform, and services are often given randomly.

“In almost three fourths of the cases relating to boys, more admissions can be attributed to the prevailing bias against the girl child in society,” said an NHM official, requesting anonymity, “While other cases can be attributed to better immunity among girl children to combat diseases. Meanwhile, in 31 of 51 districts, mostly tribal and having low nutrition and maternal health levels, have a death percentage of more than 10.

If we go by actual figures, Madhya Pradesh has a death percentage of close to 15%,” the official said. The case of underreporting is illustrated by the NHM’s Child Health Review 2019-2020, which spotlights 43 districts where government officials didn’t report more than 50% of deaths of children under five, to falsely jack up their score. Sachin Jain, of Vikas Samvad, a non-profit in Bhopal, said, “More than 70% neonatal deaths occur within the first week, most within 48 hours. Blaming everything on the community and lack of awareness is a convenient way out for the NHM.

Under the United Nations’ Sustainable Development Goals, each country, including India, has aimed to bring down neonatal mortality to at least 12 per 1,000 live births. In 2018, it stood at 23 for India.