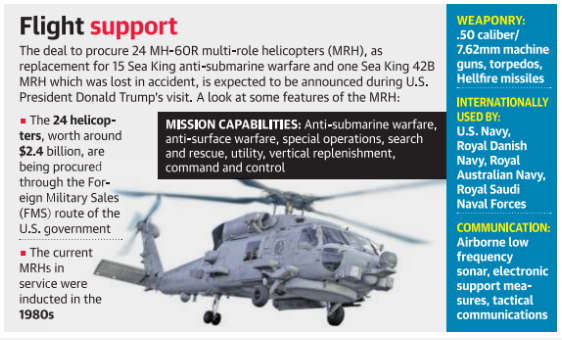 President Donald Trump is set to make his maiden visit to India on February 24-25, 2020. With no headway in the talks for a trade deal, there are expectations that a few big-ticket defence deals will be announced.

The deal for 24 MH-60R Multi-Role Helicopters (MRH) for the Navy, which is likely to be announced during the visit of U.S. President Donald Trump, is lined up for the final approval of the Cabinet Committee on Security (CCS).

The 24 Lockheed Martin-built helicopters, worth $2.4 billion, are being procured through the Foreign Military Sales route of the U.S. government.

The Navy is facing an acute shortage of MRHs, with several warships operating with empty helicopter decks.

These helicopters are being procured as replacement for 15 Sea King Anti-Submarine Warfare helicopters de-inducted in 1991 and one Sea King 42B MRH lost in an accident.

The MRHs in service, Sea King 42Bs, were inducted in the 1980s and are in need of replacement.

Several big-ticket deals in the pipeline:

However, these are at various stages of procurement.