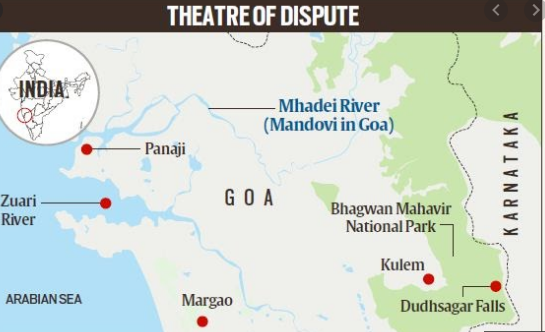 The Supreme Court has passed an interim order allowing an application by the State of Karnataka to notify the Mahadayi Water Dispute Tribunal’s award.

The water-sharing dispute has the states of Goa, Maharashtra, and Karnataka vying for water from the Mahadayi River.

The project was proposed by the Bommai Committee.

1.Kalasa-Banduri project planned in 1989, Goa raised objection to it.
2. Goa filed a complaint seeking setting up of a tribunal in July 2002.
3. The Ministry of Water Resources kept the clearance given to Karnataka in abeyance in September
2002.
4. Goa moved the Supreme Court in 2006 seeking the constitution of a tribunal, withdrawing approval for any work in the basin.
5. Mahadayi (Mandovi) is a water deficit basin and water diversion could impact the environment.
6. The Mahadayi Water Disputes Tribunal was set up in November 2010.

What is Kalasa-Banduri Nala project?

The Kalasa-Banduri Nala is a project undertaken by the Government of Karnataka to improve drinking water supply to the Districts of Belagavi, Dharwad, and Gadag.

It involves building across Kalasa and Banduri, two tributaries of the Mahadayi river to divert 7.56 TMC of water to the Malaprabha river, which supplies the drinking water needs of the said 3 districts, i.e., Dharwad, Belagavi and Gadag.

It is a canal project undertaken by Karnataka to divert water from the Mahadayi river to the Malaprabha.

The river travels 35 km in Karnataka, and 82 km in Goa before joining the Arabian Sea.

The River Mahadayi is called Mandovi in Goa.