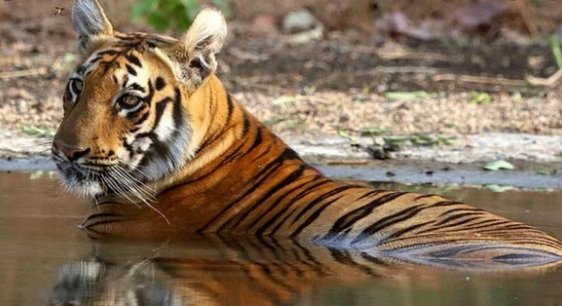 No man-animal conflict foreseen on account of water, say officials

There was no incident of wild animals straying into human habitations for water last year and it will hold good for the current season too as there is enough water for them to tide over the harsh summer in the Reserve, which is spread over 893 sq km of core area and 1,122 sq km of buffer. The Tiger Reserve covers areas in Adilabad, Kumram Bheem Asifabad, Mancherial and Nirmal districts, which had once formed undivided Adilabad. There is water still flowing in the Kadem canal which cuts through the KTR core area and the recent release of water in Saraswati canal from Sri Ram Sagar Project also resulted in water being available from Khanapur in Nirmal district to to Luxettipet in Mancherial.

“The high point of construction of artificial water holes in the Reserve this season is the huge saucer pits, 5 m in diameter, meant for the large herds of bisons. “Bisons are large animals and move in herds of 15 to 18 requiring enormous quantum of water to quench their thirst. The larger saucer pits will meet that requirement,” the Field Director added as he pointed out at the saturation level of works undertaken to provide water to the wild animals.

All the saucer pits are being cleaned and water filling will start on March 2. The KTR management will also construct temporary bunds across slow moving water inside the core area so that the arrested water becomes a small water body.