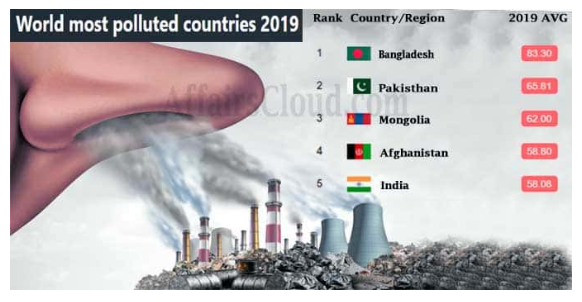 In the 2019 World Air Quality Report-Region & City PM2.5 Ranking” compiled by IQAir AirVisual
India ranked 5th as the most polluted country in the world and topped in an annual list of cities with the worst air quality in the world.

The report has been prepared by monitoring the real time data to tackle the urgent issue of air pollution.

Air Pollution estimated to contribute toward 7 million premature deaths a year, while 92% of the world’s population are estimated to breathe toxic air quality (WHO, 2016).

In less developed countries, 98% of children under five breathe toxic air. As a result, air pollution is the main cause of death for children under the age of 15, killing 600,000 every year (WHO, 2018).

In financial terms, premature deaths due to air pollution cost about $5 trillion in welfare losses worldwide (The World Bank, 2016).

This focus of the report is PM2.5 concentrations- a pollutant measuring up to 2.5 microns in size, widely regarded as most harmful to human health. The microscopic size allows the particles to enter the blood stream via the respiratory system, causing far-reaching health effects, including asthma, lung cancer and heart disease.