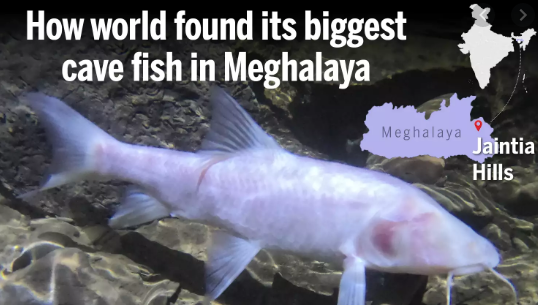 A team of experts from the UK (United Kingdom), Switzerland and India have discovered the world’s largest species of cave fish in Jaintia Hills, Meghalaya. The fish, Tor putitora has no eyes and is white due to lack of melanin pigmentation.

i.The details of the find are published in the issue of Cave and Karst Science, published by British Cave Research Association.

ii.The fish was found to be more than 40 cm in length & considerably bulky than the previously known fishes.

iv.The fishes are commonly found in the rivers that flow along the foothills of Himalayas, Afghanistan, Bhutan, Myanmar and Nepal.

v.A team of international scientists discovered the fish on february 2019, when they were carrying out the Abode of Clouds Project, which was launched in 1992. Under the project, scientists have been studying and mapping caves in Meghalaya.