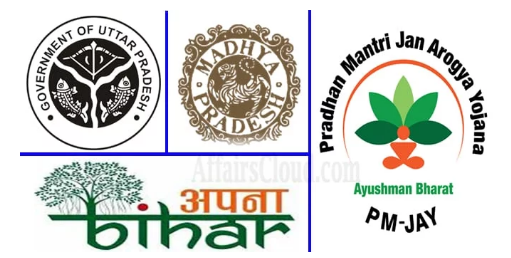 MP(Madhya Pradesh) tops the list for outgoing patients at a number of at least 11,765.

According to the analysis carried out by the National Health Authority (NHA) on the portability feature of the Narendra Modi government’s flagship insurance scheme, PM-JAY -Pradhan Mantri Jan Arogya Yojana (generally referred to as the Ayushman Bharat) availed by 81,254 patients, People can seek treatment in other states under the PM-JAY.

i. As per the analysis, MP has been followed by UP(Uttar Pradesh), which has sent 4,288 patients to Uttarakhand, and 3,572 patients to Maharashtra.While Bihar, in turn, has sent 3,258 patients to UP.The states of MP & UP contribute nearly half of portability cases by volume and value.

ii. According to the telephonic survey conducted on 938 PM-JAY beneficiaries showed that up to 70 % of patients have reported that they are going for portability due to lack of required facilities in home states, whereas 20 % stated that they were referred to other states, which suggests unavailability of manpower and infrastructure facilities.

iii. A majority of patients have chosen Gujarat for cardio-thoracic, vascular and neurosurgery as also for cancer care – medical oncology and paediatric cancer, interventional neuroradiology, burns management and poly-trauma.

iv. The patients are mostly travelling from UP’s Bijnor and Saharanpur; MP’s Ratlam, Dhar, Mandsaur and Jhabua; Jharkhand’s Garhwa districts; and the union territories of Dadra & Nagar Haveli to NHCPs; Ahmedabad, Vadodara and Valsad in Gujarat; Dehradun in Uttarakhand; Varanasi in UP; and Nagpur and Mumbai in Maharashtra.

v. The average treatment cost under portability option is Rs.24,103,which is almost double the average national amount of Rs.13,499. While in case of treatment under National Health Care Providers (NHCP), this amount increases to Rs.39,028 per patient.

It is an important feature of the PM-JAY that has been built into the design of the scheme to focus on 2 issues namely- migrants, and the lack of quality tertiary-level services in some states.

It is the world’s largest health insurance scheme fully financed by the government. The scheme was launched in 2018 under the aegis of Ministry of Health and Family Welfare (MoHFW) in India aimed at making necessary interventions in primary, secondary and tertiary health-care systems.

Health insurance cover of Rs. 5 lakhs per family per year for secondary and tertiary care hospitalization to the poor and vulnerable families will be provided under the scheme.