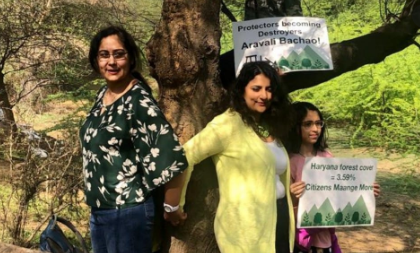 Protest marking the anniversary of the Punjab Land Preservation Act amendments by the Haryana Government.

The event ‘Aravalli Calling’ was held with the aim of creating awareness about the importance of the Aravalis and to urge the government to preserve the State’s flora and fauna.

The amendments made to the 118-year-old Punjab Land Preservation Act (PLPA) will open up nearly 60,000 acres of the Aravali hills to real estate development.

The Aravalis are threatened by illegal tree felling and construction activities.

Haryana has the lowest forest cover in India of a mere 3.6% and the PLPA Amendment Bill may further decrease this cover.

About The Aravalli Range:

The Aravalli Range is a mountain range in Northwestern India, running in a south-west direction, starting near Delhi, passing through southern Haryana and Rajasthan, and ending in Gujarat. The highest peak is Guru Shikhar.
The Aravalli Range acts as a barrier to the spread of the Thar Desert, plays an important role in the recharge of groundwater and is home to a vast array of biodiversity including many forests and wildlife sanctuaries.