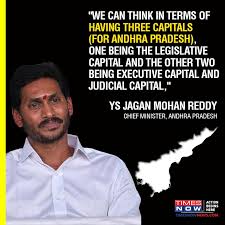 [op-ed snap] Whither Amaravati?: On the capital city of Andhra Pradesh

Sometimes ideas can sound good, but when it comes to implementation they need to be tested for feasibility and timing.

Andhra Pradesh Chief Minister hinted that the South African model of three capitals was best suited in his State and that his government would work towards this.

In South Africa, the administrative capital is in Pretoria, its national legislature in Cape Town and its judicial capital in Bloemfontein.

It stems from the idea that the distribution of executive, legislative and judicial governance across Visakhapatnam, Amaravati, and Kurnool would allow for â€œa decentralised development of the State.

The location choices are in the upper, central and lower geographical regions.

Such an arrangement follows the recommendations of the expert committee appointed by the Home Affairs Ministry in 2014 to study alternatives for new capital.

The panel had argued against the need for a greenfield capital city and to focus on distributing locations of governance beyond the Vijayawada-Guntur-Tenali-Mangalagiri urban area.

Government-appointed G.N. Rao committee has recommended that the Assembly's location be retained at Amaravati, with the Secretariat and High Court moved to Visakhapatnam and Kurnool.
What was done

The previous party in power decided to build a grand capital in Amaravati and acquired large parcels of land from farmers.
Amaravati has become a functioning State capital for all purposes now.
Many farmers had agreed to give up fertile land for the expansion of the capital as part of a land pooling scheme.
They were to have received residential and commercial plots as compensation.
If the government limits Amaravati to hosting only the Assembly, it must take into account the concerns of affected farmers.
As considerable work has been completed in Amaravati as a functioning capital, it should be taken into account before embarking upon the decentralisation idea.