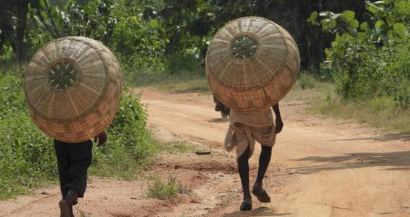 Their lifespan is approximately 26 years less than the average Indian’s life expectancy. Despite the village’s proximity to several public offices such as the panchayat, block and district headquarters, being surrounded by other ethnic groups with better access to information, and even economically connected with relatively advantaged neighbours, the real reasons that caused the deaths hardly drew any public attention. Surveillance by the administrative authorities over the population in all other matters of their lives had failed to detect anything about the catastrophe until a few surviving inhabitants of the village made a plea to rescue them from hunger and diseases.

The uncertainty of Adivasi life has a strong connection with the ‘mainstream’ view about them. In popular discourse, the socio-economic disadvantages of the Adivasis as compared with the rest of the population are often seen through a lens of benevolence. This in turn not only deprives the Adivasis of the socioeconomic progress they are capable of but also results in a loss to the rest of the nation. The rich moral, cultural and social values, and linguistic and other practice-acquired developments that the Adivasis have been nurturing throughout history could have added immensely toward strengthening our democracy.

We were part of a study conducted by the Asiatic Society and the Pratichi Institute among 1,000 households across West Bengal . The study found that there exists, both in the public and academic domains, a wide gap in knowledge about this selectively forgotten and pragmatically remembered population. Who they are, where they live, what they do, what their socio-economic status is, what their cultural and linguistic practices are, are all questions to which the prevailing answers are fragmented and vague. For example, in West Bengal, there are 40 Adivasi groups notified by the government as Scheduled Tribes , but most people use the terms Adivasi and Santal interchangeably.

Santal in fact, is but one of the 40 notified tribes forming 47% of the total ST population. This knowledge gap leads to democratic denial for the Adivasis. The imposed superiority of the outside world has resulted in the Adivasis considering themselves as inferior, primitive and even taking a fatalistic view of their subjugated life. One outcome of this is the erosion of their great linguistic heritage .

However, Adivasi acceptance of the ‘imposed modern’ does not guarantee their inclusion in the apparent mainstream. They are often reminded of their primitive roots and kept alienated. Again, pushed to the side by exploitation and oppression, marginalisation and subjugation, Adivasis, in many cases, cling to oppressive behaviours such as witchcraft which only make the label of them being primitive even more indelible. The vicious cycle of political-economic deprivation and social alienation continues to keep them subjugated to the ruling modern.

The possibility of fair implementation of public programmes, however, is contingent to an agentic involvement of the communities concerned. Instead of being considered to be mere passive recipients, Adivasis must be respected as active agents of change and involved in all spheres of policy, from planning to implementation. It is imperative that the entire outlook on the Adivasi question is reversed. By ensuring their right to live their own lives, the country can in fact guarantee itself a flourishing democracy.