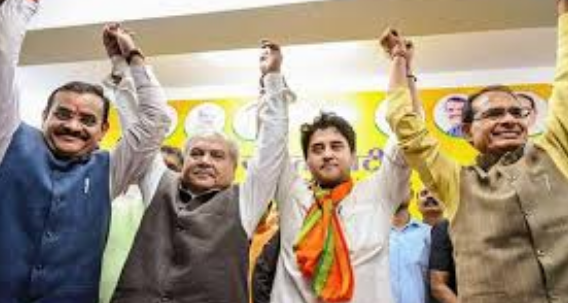 Last year, in November, in Maharashtra, Devendra Fadnavis took oath as Chief Minister early morning one day only to be replaced within days by Uddhav Thackeray from the Opposition alliance, which consists of parties that are ideologically mismatched. And before that, in Karnataka, defections from the Janata Dal -Congress coalition to the BJP brought the government down.

The total budgeted expenditure of the Central government for 2019-20 is Rs.27.86 lakh crore. Let us look at a few important ways in which the power game is played out in India. In Delhi, hate speeches delivered by a few members of a political party did not help that party come to power. Most of what is online consists of abuse of rivals and vilification of Opposition parties.

Money also fuels much of what we see today. It was money that was responsible for the defections in Karnataka in 2019, and in Madhya Pradesh recently. The practice of whisking away MLAs to distant resorts to prevent them from being lured away by the Opposition is unique to India. In this game, those with money and the ability to engineer defections can always come to power.

A corporate scamster is arrested when the money trail is discovered, but no effort is taken to trace the money trail during massive defections. Good governance needs democracy. But today, hardly any political party in India is internally democratic. The use of muscle and money power makes re-elections possible.

Parties that try to win power based on a track record of good governance show mixed results.

All governments, whether Central or State, are in financial difficulty. More than 25% of the Central Budget is spent on paying interest on money borrowed by the government. The Central government has made efforts to bring it down, but has not been able to meet its targets. India’s fiscal deficit is among the highest in the developing world, with the IMF estimating it to be 7.5% of the GDP in 2019.

That means that a lot of the public’s money is either gone or is under great risk.

India needs a system that throws up parties and politicians whose primary goal is public service, not power. That goal of having enlightened politicians who feel answerable to the people is perhaps distant. For now, we need democratic, accountable and transparent political parties. We need to check the use of muscle and money power.

This shows that the police follows the orders of their political masters. As a quick fix for misuse of money power and engineered defections, a forensic audit by an independent agency should be mandatory when MLAs defect to other parties. As the famous Watergate dictum goes, we need to “follow the money”. That alone can restore public confidence in democracy.

Above all, we need political party reforms that make parties transparent, accountable and democratic. Voters are no doubt getting educated rapidly, but they are not in a position to bring about inner change in the electoral and political system merely through voting.