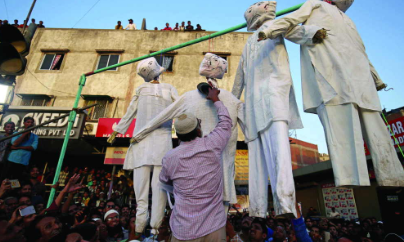 India is one of only 58 countries that have the death penalty on their statute book and have used it in the recent past.

In January, when senior advocate and human rights activist Indira Jaising urged the mother of the 23-year-old victim of the infamous December 16, 2012, gang rape and murder case to “forgive” the four death row convicts, there was a backlash not just from the mother but the public as well.
This was despite Ms. Jaising making clear that she was with the mother in her pain, but “against death penalty”.
The debate over the death sentence is going on for a long time. Those in favour of capital punishment see it as a deterrence against such type of crimes while others opine that it has not had any such effect.

In British India’s Legislative Assembly, the first time an issue was raised regarding capital punishment was in 1931, when one of the Members from Bihar, Gaya Prasad Singh, sought to introduce a Bill to abolish the death penalty for offences under the Indian Penal Code .
However, this was defeated.
At the time of Independence, India retained several laws put in place by the British colonial government, including capital punishment for various crimes under the IPC.
A crucial change in the law was made in 1955 when the Parliament repealed Section 367 of Code of Criminal Procedure , which until then mandated the courts to record reasons where it decided not to impose a sentence of death for offences where the death penalty was an option. The CrPC was re-enacted in 1973 where several changes were made, notably to Section 354 mandating judges to provide special reasons for why they imposed the death sentence.

In 1967, the 35th Report of the Law Commission had argued for retention of capital punishment in India.
The report stated that retribution should not be understood as an “eye for an eye”, but in its refined form as public denunciation of crime. It also stated that there are a category of individuals who are “cruel and wicked”, and are not capable of reform.
A major reason stated in the report for the retention of capital punishment was the unique condition of India, and the society then prevalent.
About half-a-century later, the Law Commission, in its 262th Report, highlighted that the death penalty does not serve the penological goal of deterrence any more than life imprisonment. The commission, in its report published in 2015, recommended that the death penalty be abolished for all crimes other than terrorism-related offences and waging war against the State.

In July 2015, Yakub Memon was executed by hanging in Nagpur Central Jail for his role in the 1993 Bombay bombings.
Afzal Guru, who was convicted for his role in the 2001 Parliament attack, was executed in February 2013.
In November 2012, Ajmal Kasab, the lone terrorist captured alive in the 2008 Mumbai terrorist attacks, was hanged at Yerwada Jail in Pune. The previous execution was carried out in 2004 of Dhananjoy Chatterjee for the crimes of rape and murder of a 14-year-old schoolgirl.

Project 39A of the National Law University, Delhi, which publishes the death penalty reports has highlighted the difficulty in obtaining the exact number of prisoners under the sentence of death in India.
As per Project 39A, India has executed around 755 persons since Independence. Its report said that Uttar Pradesh carried out the highest number of executions at 366. Also, the Bareilly District Jail in the State has the distinction of carrying out 130 executions, the highest of all jails in the country, with the last execution being carried out on September 24, 1988.
Delhi’s Tihar Central Prisons carried out 25 executions, the last one of Afzal Guru on February 9, 2013.
“Though we at Project 39A have tried our best to collate data from various sources, it is an unfortunate truth that the prisons and other government departments do not have accurate records of the people they have executed,” Project 39A stated.
“Hence, we continue our struggle to get accurate data on the administration of the death penalty in India and are hindered by an absolute lack of coordination between different official sources,” it added.

A case for abolition:

“The notion of “an eye for an eye, tooth for a tooth” has no place in our constitutionally mediated criminal justice system. Capital punishment fails to achieve any constitutionally valid penological goals,” the Law Commission, in its 262th Report had said.
It pointed out that even the Supreme Court has on numerous occasions expressed concern about arbitrary sentencing in death penalty cases. “The court has noted that it is difficult to distinguish cases where death penalty has been imposed from those where the alternative of life imprisonment has been applied,” it said.
The commission had stated that the constitutional regulation of capital punishment attempted in Bachan Singh case has failed to prevent death sentences from being “arbitrarily and freakishly imposed”.
The commission had put a case for abolition of death penalty, except terrorism-related offences and waging war, noting,“Retribution has an important role to play in punishment. However, it cannot be reduced to vengeance”.