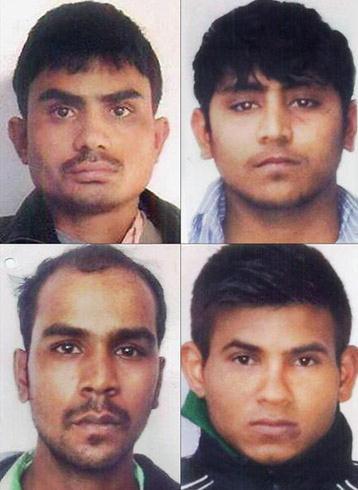 , said a Tihar Jail official. Vinay's family reached the DDU Hospital an hour later. An official said that the convicts had not expressed any 'last wish' or will to authorities. Their belongings and money they earnt during their stay in jail will be handed over to their respective family members, the official added.

The country was rocked by the brutal nature of Nirbhaya's gangrape and murder in December 2012, which led to a major reform in rape laws. On the fateful night, the 23-year-old victim and her friend, after watching Life of Pi at a cinema hall in south Delhi’s Saket, had boarded a chartered bus from Munirka Bus Stand at 9 p. when the gangrape took place.

Arrest and conviction in record time.

A fast track court began proceedings against the five adult accused on January 17, 2013.

It awarded death to all four convicts. On March 13, 2014 the Delhi High Court upholds the death sentences awarded to the four convicts. Three years later, the Supreme Court on May 5, 2017 upheld the death penalty.

The 2013 Act, which came into effect on April 2, 2013, increased jail terms in most sexual assault cases and also provided for the death penalty in rape cases that cause death of the victim or leave her in a vegetative state.

Having exhausted all their legal remedies, the four convicts went on pleading spree after the first death warrant was issued against them for January 22 at 7am inside Tihar Jail. The second death warrant was issued by the Delhi court on January 17 for February 17, but it too got postponed as Vinay’s mercy plea was decided by the President then. This led to an unprecedented event, in which the Delhi High Court sat for a hearing on a Sunday where Solicitor General Tushar Mehta argued that the four convicts were intentionally delaying the process of execution of death sentences. On February 17 the Delhi court issued fresh death warrants for the execution of the four convicts on March 3, at 6 a.

In the representation, he contended that the Code of Model Conduct for the Delhi elections was still in force when the Delhi Government made its recommendation to the President to reject his mercy plea. inside Tihar Jail. Even a day before their execution, the convicts moved a Delhi court seeking stay of the executions on various grounds.