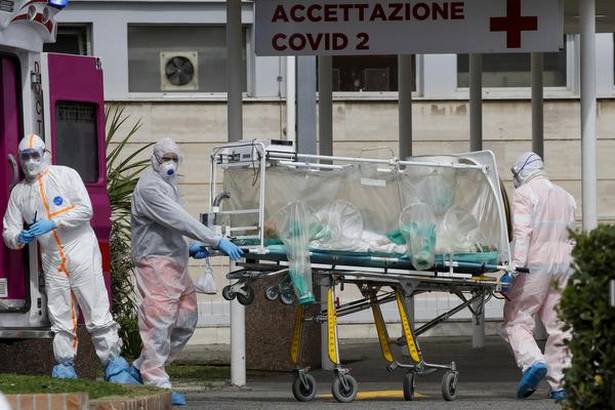 On March 20, Italy reported 5,900-odd fresh cases and 627 deaths, the highest daily tally of mortality reported from anywhere in the world. The total number of cases in Italy had crossed 40,000 and deaths 4,000, overtaking the death toll in China. Ironically, just as the Olympic torch was being lit in Athens, there was a blaze of COVID-19 in Italy. Europe, after the tumult of two World Wars, had embarked on the road to recovery through mutual cooperation, exemplified by the Maastricht Treaty in 1993, which established it as a union of constituent nations, a borderless region to facilitate trade and the free movement of people.

The union, reinforced by the post-War emphasis on welfare, led to the western side of the continent establishing some of the most advanced health care systems, which resulted in the high life expectancy rates seen now. Indeed, death rates exceeded birth rates, putting the population in a state of decline where the net replacement rate was less than one. Thus, Europe aged, even as it became relatively wealthy. Italy’s famed Colosseum and other attractions drew millions of tourists each year, making the country the fifth most popular tourist destination.

An open border meant that the incoming tourist could travel anywhere in Europe. Perhaps these factors, that is, an ageing population, a high rate of internal migration, and a constant flow of tourists proved to be its undoing when the pandemic came knocking at its door. In the movie Contagion , a health care thriller rediscovered after the COVID-19 spread, an epidemiological surveillance officer explains the term R0, “the reproduction number”, which in public health jargon shows how fast a disease spreads in the community. In epidemiology, the R0 of an infection can be thought of as the expected number of cases directly generated by one case in a population where all individuals are susceptible to infection.

The R0 for Covid-19 has been estimated to range from 1.5 to 3.5 and to effectively stop the pandemic, we need to reduce this to less than 1. What makes Covid-19 different from flu is the fact that humans lack antibodies to fight it, which is why it is termed “novel”. As the case count increased from a few hundreds to several thousands, China’s apparently draconian lockdown worked to ebb the spread of the disease. On February 20, the first case emerged in Italy.

This was a healthy young male who was initially not a coronavirus suspect. His only significant history was that he was at a dinner with a few Chinese tourists two weeks earlier. Lombardy, the industrial capital of Italy and the fashion capital of Europe, has had close connections with China. The country, along with Spain is popular with retirement planners.

Eighty per cent of COVID-19 patients were asymptomatic, thereby reducing the total positive tests in comparison to the prevalence of the disease. Perhaps no other disease that we know in modern medicine has required such a high level of ventilator utilisation. On March 8, the Lombardy provincial government ordered a lockdown as the number of cases rose to 8,000. This led to the spread of the disease to other regions of the country, which forced the government to order a total lockdown on March 9.

Hospitals were scrambling to make beds for patients. The ICU utilisation of COVID-19 patients was particularly high and health care was a scarce resource. The ICUs were split to treat exclusive coronavirus patients and for other medical conditions. Soon many hospitals had to convert every ICU into a COVID-19 ICU, which severely impaired the response to other medical and surgical conditions.

A significant feature of the outbreak in its early days was the high infection rate among health care personnel, which had a significant impact on the system’s ability to treat the surge of cases. In the first week of March, about 10 per cent of the samples that tested positive turned out to be from health care professionals. This was a critical bottleneck in Italy. Perhaps the most significant aspect of this epidemic in Italy was the response from the people.

They could not follow the stringent discipline enforced in China. Nearly 44,000 people have been booked across the country for defying prohibition orders. Epidemiologists warn that the epidemic has not yet attained its peak in Italy. The logic of this assessment is based on the 14-day interval from the lockdown initiated on March 9.

Experts have argued that even if the lockdown was only partially effective, it would have helped in bringing about a quicker flattening of the peak. Ibuprofen lowered the subjects’ immune response, which hampered their recovery. An unprecedented positive feature of the crisis is how Italian doctors have managed to contribute a wealth of information, disseminating scientific knowledge through clinical papers, even as they have been handling the biggest medical crisis of their lives. Doctors have reported that supportive care and mechanical ventilation have benefited patients.

Younger patients reportedly responded better to CPAP , a method of non-invasive ventilation. China had been using a Lopinavir/Ritonavir combination, a protease inhibitor used in human immuno virus infection with varying levels of success. The most significant finding released recently was the usage of Favipravir, an antiviral approved in Japan for flu, being successful with significant remissions. The critical part is training the personnel to ensure that they do not contract the infection.

Italy, being one of the countries with the oldest populations in the world with a high rate of diabetes and hypertension , coincidentally contributed to more deaths. The average utilisation of a ventilator was at least a week in Italy, and a conscious decision was made to use life-saving machines on those whose chances of survival were better, generally between the old and the young. The mortality rate among the older population has been high. Italy has reported only two deaths below the age of 40.

This broadly compares with the data released from China. Malnutrition and immuno compromised states do increase coronavirus mortality. One glimmer of hope in this crisis is the relative sparing of children so much so that the United Kingdom tried to “#KeeptheSchoolsOpen” to generate herd immunity, which eventually proved futile because this only helped the faster spread of the infection to the elderly. However, the lower instance of hospitalisation in children needs to be taken lightly as the disease is still evolving and its response in conditions of malnutrition in developing countries is unknown.

Italy has been testing only symptomatic people since March 10 as the testing had overwhelmed the capacity at laboratories. Italy has done 2,100, the United States 74 and India 5 per 10 lakh population. The tests have been done using a method called RT-PCR, which is costly to implement in a country with a large population like India. The low test rate has been a cause of concern with India reportedly having only 150,000 test kits for a population of 140 crore.

The European response has been quite different from China’s, characterised by varied, sometimes even bizarre, response strategies. Europe’s advanced health care network is its only solace as is the fact that the focus is on management rather than prevention. Italy is not a backward nation. It is not a poor country.

If a health care crisis can affect such a nation, it shows a general lack of preparedness to fight epidemics. It is ironical to see how a country figuring among the highest ICU beds per capita could run out of the resource. It is imperative that governments around the world realise that public health departments are important and the governments dole out enough recapitalisation measures. The era of public health began with John Snow mapping the points of contaminated water supply in London 150 years ago.

Population health, health care modelling, outbreak modelling and epidemiological intelligence services need to be ramped up and such resources need to be made available in rich and poor countries. With a predominantly young population, India may appear deceptively to be at an advantage. However, India cannot afford to be complacent. The country is still in stage II , during which training to health care professionals, vigorous contact tracing and improved testing capacity should be the immediate priority.

The best way India can manage this epidemic is by stopping its spread in a densely populated country with high levels of air pollution and a high prevalence of respiratory diseases.