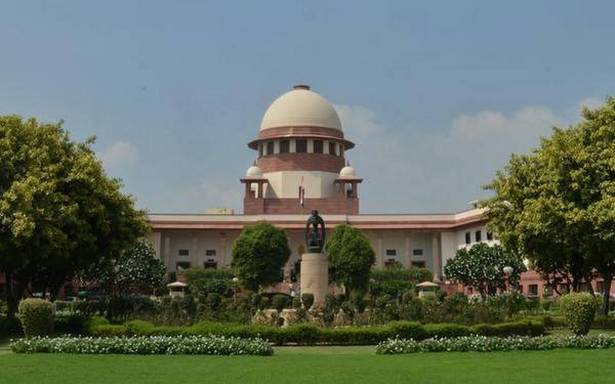 The Supreme Court on Monday decided to further restrict its functioning on account of the COVID-19 scare and resort to the digital mode to maintain social distancing and prevent spread of infection.

The Supreme Court Bench led by Chief Justice of India Sharad A. A Bench led by Chief Justice Bobde heard a few cases via videoconferencing on Monday. A giant screen, instead of the usual crowd of lawyers and litigants, greeted Chief Justice Bobde and his fellow judges as they entered the courtroom. The screen, placed in front of the judges’ dais, was connected to the Old Court Masters’ Room at another end of the Supreme Court premises. This room was fitted with microphones and screens for lawyers to present their cases to the CJI Bench via videoconferencing.

The meeting on Monday was held by Justices L. Nageswara Rao, Surya Kant and Aniruddha Bose and attended by Supreme Court Bar Association president Dushyant Dave and secretary Ashok Arora, Supreme Court Advocates-on-Record Association secretary Joseph Aristotle S. A circular issued by the Supreme Court late on Monday explained that the cases would be heard through an app called ‘Vidyo’. Once the case is approved for urgent hearing, it would be listed for the next day. The lawyer concerned would be mailed a video link and he or she can use it to present his case via videoconferencing at an allotted time. If the case is not listed for hearing via videoconferencing, the advocate-on-record concerned would be provided with a telephone number by the registry.