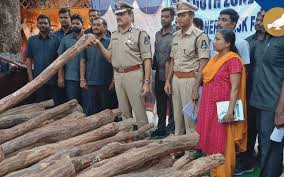 Red sandalwood, is a species of Pterocarpus endemic to the southern Eastern Ghats mountain range of South India.

The tree is known for rich red colour of its wood. The wood is not aromatic.
Note: The tree is not to be confused with the aromatic Santalum sandalwood trees that grow natively in South India.

Pterocarpus santalinus was listed as an endangered species by the IUCN, because of overexploitation for its timber in South India. However, it was later reclassified to Near Threatened in 2018, as the scale of this loss is not properly known.

It is also listed in appendix II of the CITES, which means that a certificate is required in order to export it, that should only be granted if the trade is not detrimental to the survival of the species.