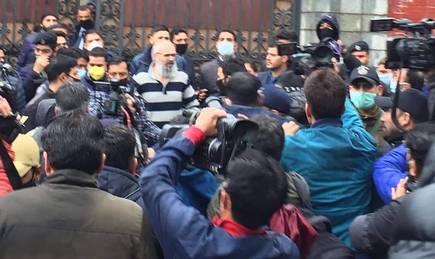 “It’s a very different world today,” he tweets after his release.

“We face the fight of our lives over the next few weeks and months as we come to terms and work to defeat COVID-19.

Abdullah was detained on August 5 last ahead of the Centre's decision to revoke J&K’s special status and later booked under the Public Safety Act and kept in the Hari Niwas sub-jail. Abdullah, who turned 50 in the jail on March 10, called for the release of other detained persons. High-speed 4G Internet services must be restored forthwith so that people can access sites and learn how to fight the COVID-19,” he said. Abdullah posted pictures of reunion with his family, including mother and father Dr. Farooq Abdullah, on the social media.

Abdullah’s release was a step to correct one wrong among many wrongs. “The government should release all, including PDP's Mufti and J&K People's Movement chief Dr. Recently floated J&K Apni Party chief Altaf Bukhari welcomed Mr. “So happy to learn that Omar Abdullah’s unconstitutional and undemocratic detention has been revoked at last. It’s about time the Union government restores democratic and constitutional rights to the people of Jammu and Kashmir as well,” she said in a tweet. Separatist Hurriyat Conference, headed by Mirwaiz Umar Farooq, also demanded the release of detainees.

“JKLF chief Yasin Malik’s wellbeing is the responsibility of the Government of India. All Kashmiri political leadership, including Hurriyat leaders, should be released, especially after the COVID-19 pandemic,” said a Hurriyat spokesman.