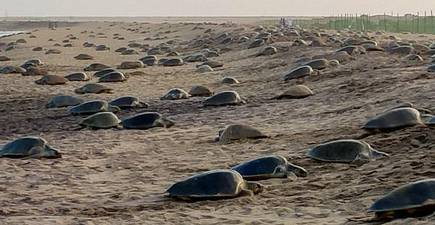 Later in the day, the unusual phenomenon of day-time mass nesting took place at the coast. As a large number of mother Olive Ridleys are still in the sea near this coast, mass nesting is expected to continue for some more nights.

Proper maintenance of cleanliness and provision of protection to the turtles at sea since November 2019, when the turtles mate, are major reasons for the large scale mass nesting of Oliev Ridleys at Rushikulya this year, said Berhampur Divisional Forest Officer Amlan Nayak.

October 2018’s Cyclone Titli, and the floods that followed, left huge piles of waste over about 8 km of the Rushikulya coast, which had to be cleaned with excavators. It has been estimated that minute particles of the waste had remained, keeping the nesting Olive Ridleys away in 2019.