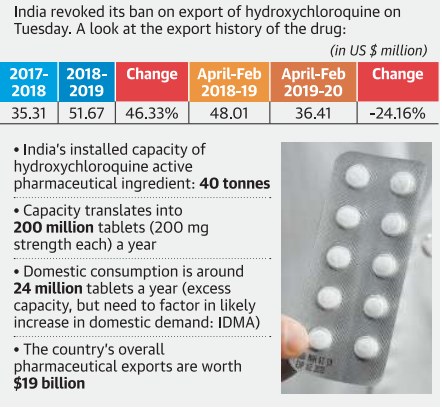 Irrespective of whether India bowed to U.S The decision to reverse the ban was made public hours after U.S President Donald Trump warned of “retaliation” if India withheld supplies of the drug for which orders had already been placed. Given the circumstances, it would be difficult to believe that the decision to lift the restriction was taken independent of U.S Trump that “India shall do everything possible to help humanity’s fight against COVID-19” should, therefore, be seen in that light. Lauded as the pharmacy of the global south, India’s decision to export the drug on humanitarian grounds to neighbouring countries and others that have been badly hit by the pandemic is welcome. Till recently India relied solely on other countries for test supplies and may look to others for essential materials if the situation worsens.

Also, India may have much to gain from the U.S Trump championed it as treatment for COVID-19 patients. The drug became much sought-after in India after the Indian Council of Medical Research approved its use as prophylaxis for novel coronavirus by certain categories of people on March 23. Two days later, the drug was placed in the restricted category for export and included in schedule H1 on March 26 to prevent its sale over the counter, thereby preventing self-medication and hoarding. India has a production capacity of 200 million hydroxychloroquine tablets of 200 mg strength each month and three well-established pharmaceutical companies make the drug.

In all likelihood, in the short term, India might not run out of hydroxychloroquine as the national taskforce for COVID-19 had relied on weak, anecdotal evidence to make the recommendation.