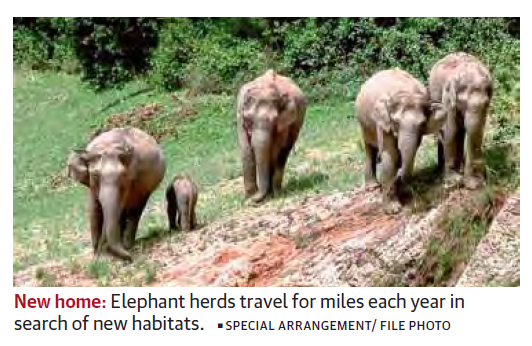 M.P. gets its first elephant colony in Bandhavgarh forest-The Hindu-30-12-2019

The ‘Tiger State’ of Madhya Pradesh, which in the 2019 census recorded the most number of estimated tigers at 526, thus securing the title, presently has no know how of dealing with elephants.

A year on, they have stayed back in Madhya Pradesh for the first time over seasons and even bred
two new calves, choosing not to return to the withering forests of north Chhattisgarh.
The herd has found plenty of space, food and water within the core area of the Bandhavgarh Tiger Reserve, and that’s why it may have stayed back.

Experts from West Bengal and Chhattisgarh were roped in, who held workshops with local staff on imparting techniques to avert man-animal conflicts.

As regards monitoring, three patrolling teams track the herd’s movement round the clock, says Mr. Gupta, Ruling out the possibility of conflict between the herd and tigers, J.S. Chauhan, Additional Principal Chief Conservator of Forests, Wildlife wing, said that both animals can coexist within
the same territory. “While one is a herbivore, the other is a carnivore, so there is no competition. The presence of elephants will not alter the movement of tigers in the area.”

Bandhavgarh National Park is located in the Umaria district of Madhya Pradesh.

Bandhavgarh was declared a national park in 1968 and then became Tiger Reserve in 1993.

The park derives its name from the most prominent hillock of the area, which was said to be given by Hindu Lord Rama to his brother Lakshmana to keep a watch on Lanka.