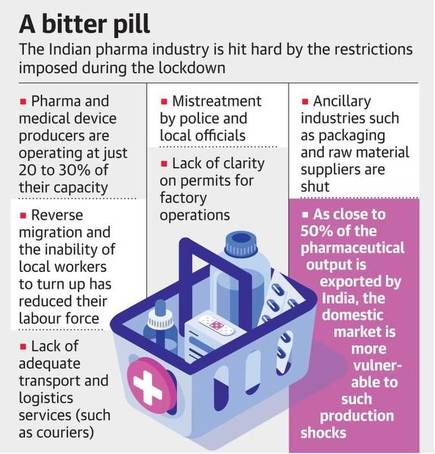 “If the production does not reach the pre-lockdown level soon, it could lead to shortages of medicines and medical devices in the coming weeks,” the letter said. Production units engaged in making essential commodities, including medicines, vaccines, masks and their ancillaries had been exempted from the restrictions imposed as per the three-week national lockdown announced by Prime Minister Narendra Modi on March 24. The letter urged the Home Ministry to allow the pharma industry to ‘ferry back their contractual workers from their native places’ and make courier services ‘fully functional’ in metro cities as well as Tier 1 and Tier 2 cities. Unless they are allowed to reach their vehicles, those vehicles will be left stranded and thus would be out of circulation,” the letter pointed out.

Even drivers who are not stranded in between trips are unwilling to take up work due to the “fear of ill treatment by the police, stoppage of vehicles on State, district and city borders, and lack of food and diesel on the route” the letter noted and said, “There is a dire need to not only address the apprehensions of these drivers but also to motivate/incentivise them . The Department of Pharmaceuticals, entrusted with ensuring the seamless production and distribution of critical life-saving medicines in the wake of the lockdown to contain the COVID-19 pandemic, also reiterated its concerns about ancillary industries that it had raised in an earlier April 3 letter to the Home Ministry. Apart from directives from the Home Ministry and the Pharma Department to State governments on the issue, the National Pharmaceutical Pricing Authority had also written to all State Chief Secretaries on March 26 after it learnt of the problems facing pharma firms. “The seamless functioning of pharma manufacturing and distribution units, both in public and private sector, is essential in dealing with the emergent situation,” NPPA chairman Shubhra Singh noted, adding that a helpline has been created for pharma producers’ operational complaints, which are also being referred to State Drug Controllers for suitable intervention.